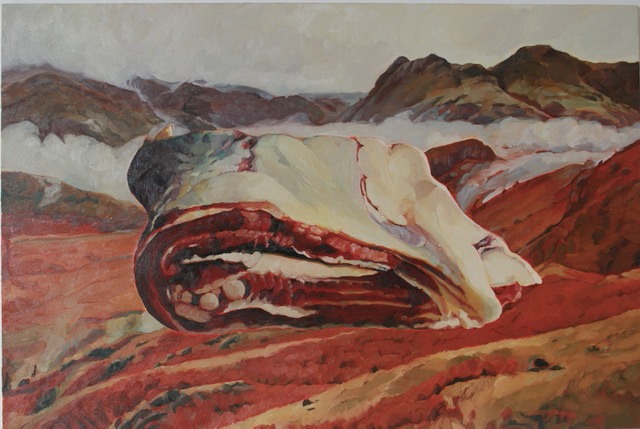 Rebecca Scott is delighted to be exhibiting two paintings in the exhibition; Red in Tooth and Claw, 2008 (shown above) and Crescent Moon, 2008. The show at Heaton Cooper Archive gallery features the work of seven eminent painters and photographers – Martin Greenland, Alan Stones, Alan Thompson, Julian Cooper, John and Rosamund Macfarlane and Rebecca Scott – who all live and work in Cumbria and the Lake District. It aims to extend and complement the inherited notion of the picturesque in both art and landscape.

The exhibition is curated by Julian Cooper who is bringing artists together in a critical stand against the “picturesque” view of the Lakes, in the gallery founded by his artist grandfather.

The term picturesque originated in Italy in the 16th century and referred to non-classical subjects in painting, with the French painter Claude Lorraine in particular embodying the picturesque ideal in landscape painting. The Lake District assumed its own identity as a distinct region after becoming a vehicle for ideas of the picturesque imported into English cultural debate by William Gilpin in the 18th century. For tourists the landscape was to be enjoyed as a series of leisurely ‘views’ from particular standpoints, preferably seen through a Claude glass.

“How we see profoundly affects the way we think, and seeing this and other landscapes as beyond ‘scenery’ and more as a dynamic layering of natural and human systems, all connecting to each other, may help in adjusting our attitudes to the benefit of all who live and visit here, whether they be human or non-human.”